What a difference this week is to last week. I’m positively flying through my goals this week. Lets look at them, and how I’m doing:

To Wednesday: I’ve not been to the gym, but I went running yesterday – that’s just as good for me, especially as I did really well – ran 12 1/2 minutes in total (run/walk/run/walk), which is 2 minutes more than last time. It’s not great, but considering it’s only the second time I’ve been running in about 6 months, I’m well happy with it. So far I’ve walked just under 8km. Not bad going for day 3/7.

To Wednesday: I wrote 354 words on Monday and 167 words yesterday. I’ve not written today, but I will, even though I’m going out in a minute, I will.

To Wednesday: This is my first check in, I posted my review of Marian Keyes’ The Mystery of Mercy Close yesterday (highly recommend it, I loved it), and I posted my ‘other’ blog on Monday – having been to an SJ Watson and Rachel Joyce event.

Totally Rocking my goals so far (and yes, Rocking did have to be capitalised, I’m Rocking them!).

Tomorrow is One Thousand Thursday, my ‘invention’ (or whatever) to push myself (and hopefully you) to get a lot of words in the week. So far I’ve done really well, but with a slip up last week, of only 300+. This week I have to get back on it. I can’t encourage people to take part if I’m not doing it myself.

Plus, I’m at a good part in the novel. I’ve decided to carry on with where I’m going. I was telling my friend about it at the weekend, and I realised that the problem with it, isn’t really a problem. I think I was making it a problem, maybe as an excuse, but it can work this way. Definitely.

So there’s me. Lets hope I’m doing as well, and am as positive on Sunday when I next check-in for ROW80.

I’m doing well, how about you reader? Are you taking part in ROW80? If so how’s it going for you? If you’re not, what are you up to? I’d love to hear from you dear reader, know who you are and what you’re doing.

The problem with following so many people on Twitter, is that sometimes I don’t hear about cool things until it’s too late. Last week I heard about something cool, luckily in time – The Hampstead and Highgate Literary Festival. Awesome.

So I looked through the program, and saw a few things that interested me, and then I saw SJ Watson (author of one of my favourite books of the year ‘Before I Go To Sleep’) and I knew I had to go to that. Not only was it him talking, it was also Rachel Joyce (author of ‘The Unlikely Pilgrimage Of Harold Fry,’ which I’ve not read, but is on my TBR list), and the title of their event was ‘What Makes a Successful Debut Novel a Global Winner.’ 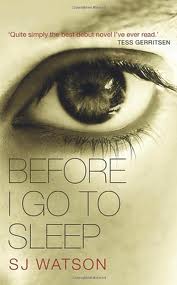 I was under no illusions that I would go there and get the secret to hgetting a global, or even national winning novel – I’ve been to enough author talks to know there isn’t a magic formula – but I knew I had to go. And luckily for me there were still tickets, and also luckily for me, I could take the day off work to go (it was 2pm, so I debated just taking the afternoon off, but not going to work on a Monday morning was way too appealing). I got a ticket, and looked forward to it ever since.

As normal at this kind of thing, both authors read pieces from their novels. Obviously I’ve read Before I Go To Sleep, so knew the opening scene he read. It was awesome though, hearing it read, by the author. I’ve not read The Unlikely Pilgrimage Of Harold Fry, but like I said, it’s on my TBR list, and hearing it read out by the author has pushed it higher on the list.

Both attended the Faber Academy, which funnily enough I was reading about last week. It’s like a school for authors, and because of going, both met their agent there. I’m thinking it’s like The Brits School for singers – it seems all new singers come from there! It’s something I’d love to do, but it’s slightly more expensive than I can justify at the moment. Ah well, lots of people still get published without going there.

I’m reading my notes from the event now, and cringing at the bad writing, why didn’t I try to make it more legible?

Watson and Joyce are very similar with their writing processes. For instance, neither plot before they write (I know this doesn’t work for me, surprisingly, I have to have a plot, very unlike me!), and both really explore the character and really get the character, before the story takes shape. Again, I’m different, in that I think of the story, and then the characters. I know from reading countless other things, my ways of these aren’t bad – they’re just different.

SJ Watson said something that I thought was brilliant. ‘I thing the biggest reason people don’t get published is their book isn’t good enough.’ It sounds stupid to be so enthralled with that comment, but he’s totally right. If your book IS good enough, and you put the work in, the chances are you’ll get published.

Which leads me nicely to the next thing they (both) said. Before trying to get an agent/publisher you really need to make the story as good as it can be. Go over and over it until you can’t make it any better. This is something that worries me, because I’m scared I’ll get bored of the novel and think, you know what, that’s good enough, and start sub-ing it to agents, knowing if I spent longer on it I’d get it better. That’s me, I’ll get bored of going over and over it. Hopefully not, and hopefully writing this down will make me consider this later down the line (you know, when the book is finished, and I’m part way through editing or think I’ve got it ‘good enough.’ In fact, I might write it out as a quote and stick it up somewhere (oh the boyfriend will love me for that!).

The last thing I’m going to mention that they said, is that you really, really need to try to get an agent/editor. They said people think that one will just come to them, or they’ll find one easily, they said it’s a lot of work, and has to be worked and worked on.

After all this, unfortunately the alloted hour was up, the questions stopped and we had to say goodbye. Or nearly.

Both Joyce and Watson were hanging around to sign books. As I don’t have The Unlikely Pilgrimage Of Harold Fry, and really can’t afford to buy it this week, I couldn’t ask Joyce to sign mine, but I could ask Watson, and did. I had a little chat with him, which was nice, and he signed my copy of Before I Go To Sleep. YAY! A signed copy of it, not just signed, but written to me.

I had a great afternoon (even if it was just an hour), and came home all inspired to write. In fact, I wrote 354 words when I got home. If only I could have an event like this every week!